Learn how robots can improve your bottom line, customer satisfaction and push you above the competition. Bring Automation, Business Efficiency, And Real Value To Your Customers!

BellaBot: BellaBot is The latest delivery robot designed by Pudu, BellaBot inherits the outstanding characteristics of the previous generation while being endowed with superior human-Robot interaction capabilities.

PuduBot:  PuduBot is featured with high efficiency. A reasonable mechanical structure makes multiple trays on one robot possible. And an innovative dispatch system makes collaboration among multiple robots possible.
These are the secrets of PUDUBOT, which saves labor cost, elevates serving efficiency, and improves the service level of your business.

KettyBot:  KettyBot With AI voice interaction, KettyBot intelligently greets and interacts with passing through customers by waking up its screen. Such a cute and smart KettyBot would obviously draw more attention than the traditional approach!

FlashBot: Flashbot is Pudu's latest building delivery robot that can take the elevator to provide safe and reliable room delivery. Powered by cutting-edge technologies, FlashBot takes intelligent delivery to the next level, enabling digital management and services of hotels and office buildings. 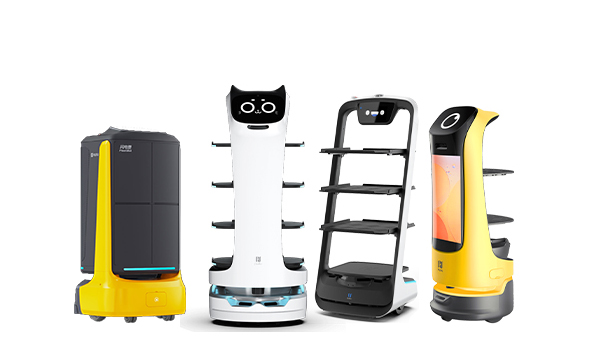 Greet your customers at the door, provide concierge services with information about restaurants, shows, local attractions, and transportation information, or even check customers in and out.

Pudu delivery robots are perfect for your restaurant! The robots can navigate autonomously from the kitchen to the tables, bringing food can greet your visitors when they arrive, and even take them to their assigned table when it is ready, navigating the floor and avoiding obstacles. Once seated, the robot can recommend today’s specials. Selected menu items presented by the robot, along with mouthwatering videos and images as a reference, ensure higher value from every seated guest.

Check out the customer success stories below: 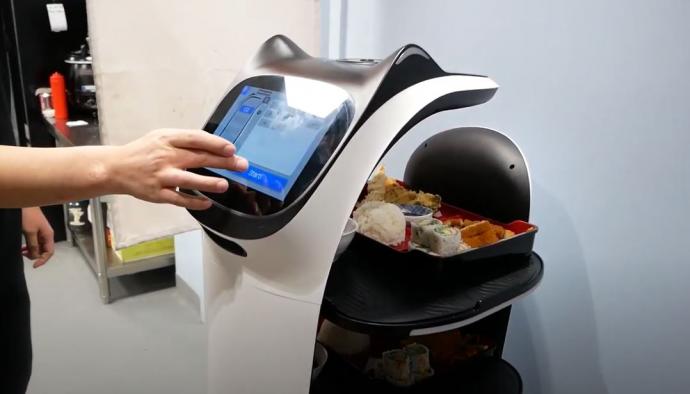 BellaBot has been a great help in the restaurant's effort to provide contactless tableside delivery during the COVID-19 outbreak. The manager at Sushi Island told the NTV reporter that no employees would be laid off because of BellaBot. She was introduced as a way to help servers, and make customers feel safer with less human contact during a pandemic.

BellaBot can easily move, orient, and navigate all by herself in highly dynamic and crowded environments. Equipped with intelligent induction trays, the robot can deliver food to 3 to 4 tables at a time. When she arrives at a table, the light strip beside the tray starts to flash, reminding the customers to pick up the food. After the food is taken off the tray, the light strip goes out, at which point the robot will move on to the next table.

PuduBot Gets a Job at an Australian BBQ Restaurant. A famous Korean BBQ restaurant on Elizabeth Street in the CBD of Melbourne, Australia, took in a new member to deliver food in the store. That is PuduBot, the iconic delivery robot from Pudu Robotics.

PuduBot has been well received by the locals since its introduction in the restaurant. While waiting for the food to be served, many customers use their mobile phones to take photos or videos of PuduBot hustling and bustling around. Robot waiters are nothing new in the modern world, but people may wonder “How does the robot deliver food to the designated location? How does it avoid people coming and going? Is it reliable? And how can it ensure the food is not spilled or dropped?”

Well, it’s all a piece of cake for PuduBot!

PuduBot is developed by Pudu Robotics, a world-leading provider of commercial robots. Pudu has developed over 400 patents, more than 60% of which are utility patents. Relying on the core technologies of low-speed autonomous driving, robotics motor, and motion control, Pudu has launched top-notch delivery and disinfection robots to the market.

Pudu robots attract attention and delight patients, they can help you proactively and creatively educate patients about preventative services, celebrate your staff, share news about upcoming research, or answer commonly asked questions, deliver food, medicine– all without increasing the workload of internal staff. For hospitals that have made an investment in capital improvements, delivery robots are a great way to spread the word, and help you achieve the rewards of your investment.

YOUNG patients and their caregivers at the Sunway Medical Centre (SMC) paediatric ward can now look forward to their meals in excitement, as they would be delivered by BellaBot, a cat-like robot employee.

SMC recently introduced four BellaBots — which would be serving lunch, tea and dinner — at the paediatric ward and lobby.

To cheer up a child who may have to celebrate his or her birthday in the ward, a BellaBot would come up to them with a birthday cake and a birthday song.

These robots, with a cute cat display on their screens, consist of four stacks of shelves where hospital staff and patients can collect and place their trays.

Their delivery functions and navigation can be customised in order for them to safely move around the wards and humans.

According to SMC CEO Bryan Lin, the BellaBots have drawn much excitement from both the hospital staff, the patients and their guardians.

“We tested the use of BellaBots in the paediatric ward where everyone was amused by the robots’ appearance, interaction and intelligence.

“Eventually, we will release them to the other wards as well,” he said during BellaBots’ virtual launch recently.

BellaBots also serves as the Lobby Ambassador where it helps visitors navigate their way through the expanding hospital.

Pudu deployed in a Hangzhou Hospital, China. In some cases, robots can also be used in places and situations where it would be too dangerous for humans to perform the same task.

In the case of the Pudu robots, they have recently been deployed in a number of hospitals and hotels in China where patients are currently in quarantine due to the 2019-nCoV, or coronavirus.

By deploying the robots to deliver food or other supplies to quarantined people, human-to-human contact is limited, which both avoids the potential spreading of the disease and removes people who might normally be performing that task from repeated high-risk encounters.

Pudu has provided robots all over China across many affected provinces for this purpose.

Pudu robots attract attention and delight patients, they can help you proactively and creatively educate patients about preventative services, celebrate your staff, share news about upcoming research, or answer commonly asked questions, deliver food, medicine– all without increasing the workload of internal staff. For hospitals that have made an investment in capital improvements, delivery robots are a great way to spread the word, and help you achieve the rewards of your investment. 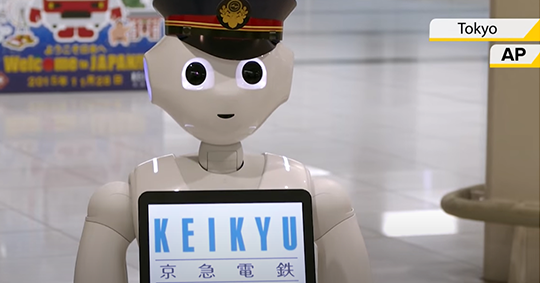 Pepper debuts as a new member of staff for the Keikyu Line railway at Haneda International Terminal station in Tokyo, Japan. The robot is programmed to interact with Japanese and foreign commuters and to introduce Keiyu Line information. 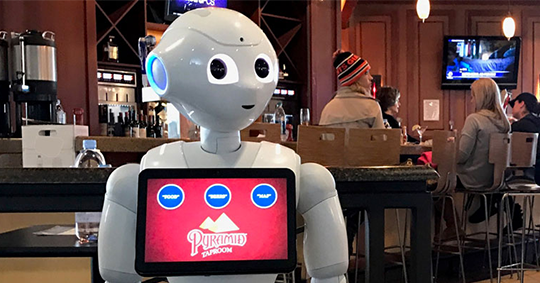 Pepper the robot will greet guests at HMSHost’s Pyramid Ale Taproom in Terminal 2 and offer assistance and menu recommendations.

Using an interactive map displayed on Pepper’s screen, passengers will also be able to find directions to their gate, restrooms and other points of interest.

Jim Schmitz, Vice President of Innovation, HMSHost, said: “At HMSHost, we are always working to identify the next opportunity to elevate the guest experience at airports. Through constant innovation, we aim to engage with travelers and assist them on their journey. We are very excited to introduce them to Pepper as part of these efforts.” 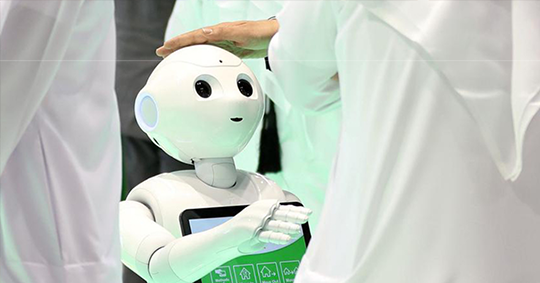 Supporting Dubai governative society’s DEWA (Dubai Electricity and Water Authority) in enhancing customer happiness through innovation.
Softec / YAS Digital Media aim at going beyond the standard customer journey, offering to prospects and customers a unique experience, simultaneously digital and physical. The strategic role is played by Pepper, the first humanoid robot: with his empathy and humanity, he is able to build a distinctive relation with the people around him and the surrounding space.
Placed as digical touchpoint into a number of stores, he is not just a digital service provider, but also puts people at their ease in order to increase the excellence of services, making Dubai the smartest and happiest city in the world.

Support E.C.S.S.R, the Emirates Centre for Strategic Studies and Research based in Abu Dhabi, to improve the visitor experience at the centre and collect prompt feedback from guests. This was the challenge accepted by Softec and Yas Digital Media, a joint venture of Fullsix Group located in the Middle East.

As an Interactive Digital Representative, through empathy and humanity, Pepper played a strategic role in building a distinctive relationship both with the audience and with the environment that surrounds it. After joining the organisation at the end of 2018, Pepper welcomes visitors, sends e-mails and collects feedbacks during the exhibitions and conferences held in Abu Dhabi and in nearby locations.

The trial, in the UK and Japan, found that older adults in care homes who interacted with the robots for up to 18 hours across two weeks had a significant improvement in their mental health

The wheeled robots, called “Pepper”, move independently and gesture with robotic arms and hands and are designed to be “culturally competent”, which means that after some initial programming they learn about the interests and backgrounds of care home residents. This allows them to initiate rudimentary conversations, play residents’ favourite music, teach them languages, and offer practical help including medicine reminders. 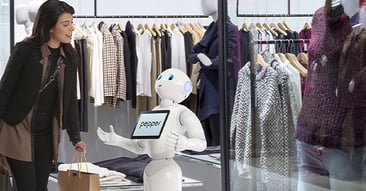 Westfield Shopping Centers recently welcomed Pepper to their San Francisco and Silicon Valley locations. Pepper was on hand to help drive foot traffic and entertain shoppers. This innovative business technology is transforming Customer Experience at retail locations and shopping malls around the country.

Pepper the robot at Valleyfair Mall in Santa Clara

Pepper the robot at Valleyfair Mall in Santa Clara was on hand to help drive foot traffic and entertain shoppers. This innovative business technology is transforming Customer Experience at retail locations and shopping malls around the country.

The Costa Diadema has welcomed aboard Pepper, a humanoid robot programmed to interact with the ship’s guests.

“Our goal is to amaze people who choose to spend their holidays with us, and to go beyond their expectations and offer something unforgettable,” said Neil Palomba, president of Costa Cruises.

The robots also inform guests about the ship and its services, including restaurants and excursions. And, Pepper offers guidance about port calls on the ship’s Mediterranean itinerary.

Costa Cruises is bringing five of the latest generation of Pepper robots on board the flagship of the fleet, to entertain guests during their vacations.